2021 has not been kind to Emerging Markets investments. While the developed nations have powered ahead on a wave of optimism caused by the vaccine rollouts, the emerging markets first fell, then stagnated.

A low price relative to the developed world is a good thing for would-be investors in the emerging markets.

But even if the price were higher, we’d still be advocating getting your money into these growing parts of the world. Loads of investors don’t bother with the emerging markets, preferring home country and developed world bias, but we think that is a huge mistake.

We’re going to tell you what’s going on in the emerging markets, why now may be a historically opportune moment to start investing in them, and how to go about doing it. Let’s check it out!

Some great places to invest in the emerging markets include Freetrade (who’ll give you a free stock worth up to £200 for signing up using this link), and others which we’ve looked at on the Best Investment Platforms page. Check it out for platform reviews and welcome offers.

What Are The Emerging Markets?

A country classified as an emerging market is a nation that has just some, but not all, of the characteristics of a developed market.

Typically, this involves a move towards greater democracy, greater regulation of the banking system, and a more professionalised stock market.

The economy and infrastructure of these countries will typically be a couple of decades or more behind those of developed nations, with people living within these countries gradually gaining more spending power, which brings with it a more industrial economy, better services and better investment in infrastructure.

But we shouldn’t just think of the Emerging Markets as one big generic blob. The MSCI Emerging Markets IMI Index is a grouping of 27 diverse countries that have little in common other than their growing economies and status as Emerging Markets, so should be considered individually.

Let’s first look at some long-term market price trends. We’ve charted the MSCI IMI indexes for both the developed and emerging markets since index inception. IMI or Investable Market Index simply means that it includes Large, Mid and Small caps.

Starting in 1994, we can see 3 distinct time periods: the first covering 1994 to 2007, where the developed world took centre stage; then 2007 to 2014 when the Emerging Markets powered ahead; and finally, 2014 to the present day, when the story has been all about developed countries like America steamrollering all in their path.

Asset prices can go through long cycles of being up or down relative to each other, based on what’s hot at the time. Today’s fashion is for US stocks, benefiting Developed Markets indexes, with the US valued highly as a safe haven in turbulent times.

We see the relative discount in the emerging markets more clearly if we zoom in on the last few years. 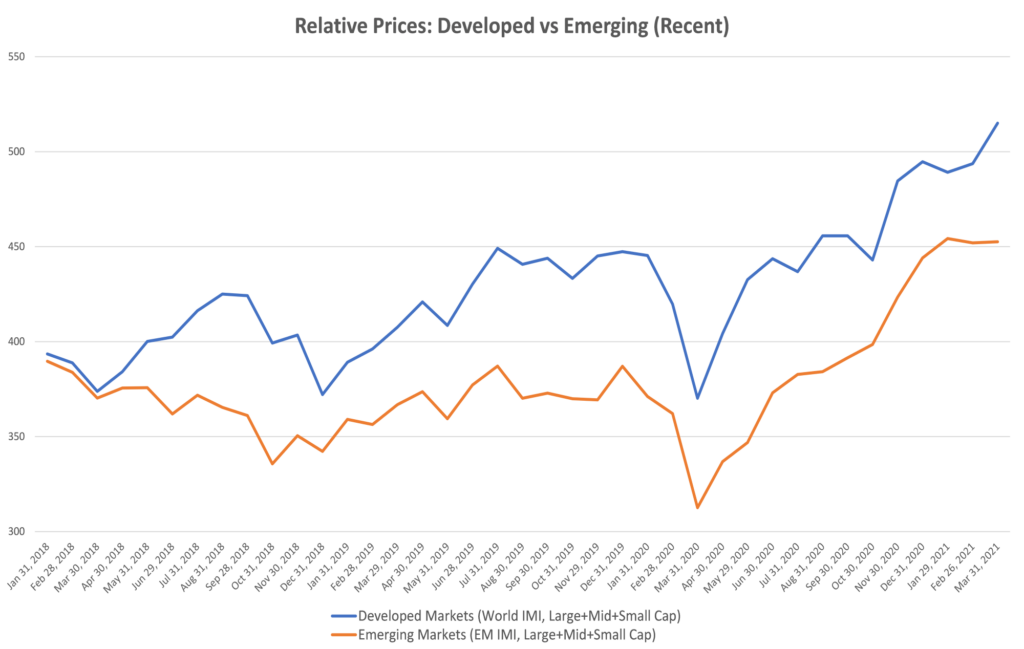 To right of the chart is now, with the vaccine effect, with the developed countries storming ahead and the emerging markets suffering a likely temporary price stagnation.

How We Invest In The Emerging Markets

The Emerging Markets is covered by one of the 3 equity funds in the Money Unshackled Ultimate Portfolio, discussed in more detail here.

The fund we each use is the iShares Core MSCI EM IMI ETF (EMIM), which faithfully tracks the MSCI Emerging Markets IMI Index of Large, Mid and Small Cap companies.

Index investing like this is one of the best way to invest in the Emerging Markets, partly because index investing just kicks ass in general for its low fees and access to entire markets, but also because accessing foreign stock markets directly can be tricky – especially emerging ones.

Many UK based investment platforms don’t even have the option of buying stocks on exchanges outside of Europe and North America.

So for us, it’s the MSCI index all the way.

If we look at the split of the MSCI Emerging Markets IMI index by country, it might surprise you to learn that 74% of this index is just 4 countries – China, Taiwan, South Korea, and India.

We could analyse the history of stock market price movements all we want, but the decision to invest in the index should essentially boil down to this question: do you think these 4 countries and their companies are going to do well over the next 10, 20 or even 30 years?

Each of these 4 countries is of such a considerable size in the index that poor performance in any one could significantly drag down overall index returns. Let’s now look at each of these developing superstars, in order of size. 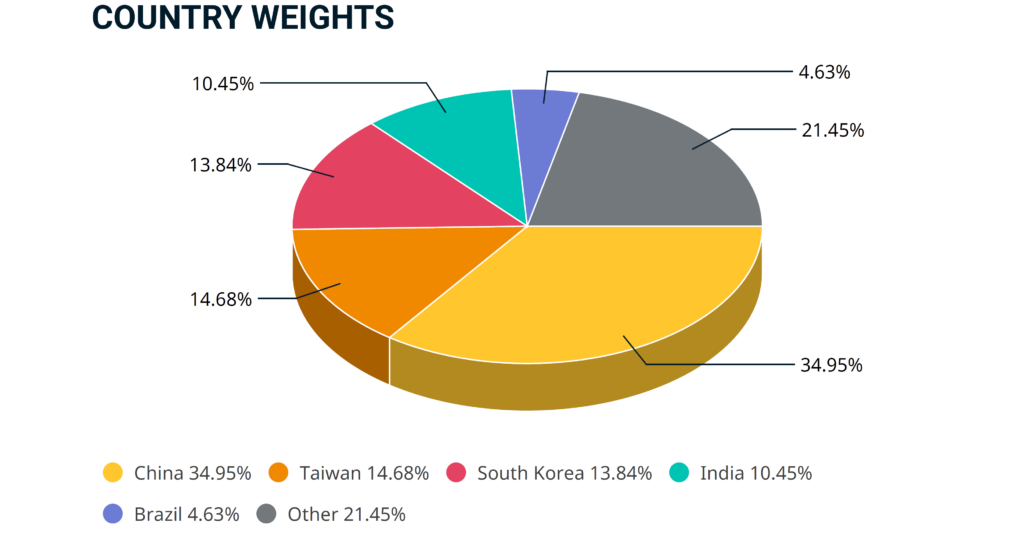 China is the big boy of the index and deserves the most focus – but even at its current weighting of 35% it is understated.

China has several different classes of shares, one of which – A Shares – can only be bought by Chinese citizens and certain approved institutional foreign investors.

As such, index providers like MSCI choose not to include them in full. Here’s where the index stood as of 2019, with it having grown the China holdings since 2018:

You can see the planned future inclusion of A Shares, which means that sometime in the future MSCI’s intention is to make China be around 50% of the index. So hopefully, China continues to perform well in the future.

There are many good reasons to think that this will be the case. Since setting covid loose on the rest of the world, after those first few weeks of panic in early 2020 China’s economy was able to carry on like nothing had happened.

While the UK and Europe were huddled indoors, cases in business-as-usual China during the January 2021 peak were around just 100 a day, in a country of 1.4bn people.

China isn’t even really bothering to vaccinate at speed either, with only 14 people in 100 being offered a jab so far, despite China being one of the few countries to have developed a vaccine.

But this doesn’t seem to have hindered them, nor stopped them growing – they are instead selling their vaccine to other countries, and using it to grow their political influence in those places.

In April 2021, the IMF forecasted China’s GDP would grow by 8.4% this year. While developed Europe grinds to a halt, China’s economy is cracking on with making money, which bodes well for the stock market.

Longer term, China is widely expected to catch up to the US in terms of geo-political power and wealth by the 2030s – so much so that worries about China dominate US politics.

If you remember, it’s all Trump ever banged on about.

America sees China as their economic rival, which is as good a reason as any to assume that China will do well over the years to come. China is also home to some of the biggest companies in the world, including social app giant Tencent who own WeChat and QQ, and online retailers Alibaba and JD.com – all massively popular in China and massive by market cap.

There are strong arguments that China should be stripped from the Emerging Markets and given its own category, due to its size.

For more information about investing in China, check out our dedicated China article next.

38% of the Taiwan slice is one company, Taiwan Semiconductor, one of the most important technology companies in the world! It supplies a significant chunk of the world’s semiconductors, critical components that power most modern electronics including computers, smartphones and cars.

54% of the entire world market in fact comes from this one company. It’s no small exageration when we say that the world as we know it would not exist without Taiwan’s semiconductor industry.

If it’s not in your portfolio, it needs to be!

There has long been a political risk with investing in Taiwan that its neighbour, China, might decide it wants to flex its muscles and forcibly make Taiwan part of mainland China.

It’s an active political issue we need to be aware of as investors watching from afar, and price this risk into how much of your pot you choose to allocate to the emerging markets.

With the emerging market nations, increased risk of disruption due to political upheaval is part of the territory.

Though there would doubtlessly be some initial market panic and noise, the long-term economic impact is unknowable.

South Korea are a trading nation on the rise who sit between the Developing and Emerging nations, with its 2 biggest trading partners being China and the US.

As a technology exporter, when other nations do well, so will South Korea. Their most significant company is Samsung, making up 32% of the value of the South Korean part of the index.

In some developed market indexes including the FTSE Developed World Index, South Korea is even considered to be a developed country.

Along with the arguments for removing China from the Emerging Markets, this shows how the lines can be blurred when trying to shoehorn diverse countries into 1 of just 3 categories (the third being Frontier Markets).

A lot of the reason behind the fall in the Emerging Markets index in 2021 is reflected in what’s going on in India right now. India is struggling to combat covid, much like Brazil, Chile, and other smaller emerging economies.

India has only vaccinated 9% of their population, but unlike China they are fast losing control of a new spike in cases that has spooked markets.

Much of these covid stats are just short-term noise though, in our opinion, that won’t impact stock prices long-term.

Even in the short-term they should bounce back, with ratings firm Care Ratings forecasting India’s GDP will grow by 10.2% over the next year, which should spill over into stock market prices.

The current fall in the price of Emerging Markets ETFs is a good thing, as you can now buy more, and we can be confident that prices will rise and even catch back up with the developed markets in due course.

India has a lot going for it demographically in the long-term, including a population of 1.4bn people who are on the long, slow march away from poverty towards middle-class affluence.

This is an enormous workforce ready to take advantage of an expected move towards offshore digital outsourcing of jobs from the UK and US.

India also has the world’s largest youth population, with a quarter of Indians aged between 10 and 24 – i.e., the wealth creators of the future.

If you’ve decided to invest in the Emerging Markets, you next need to decide by how much.

To get a similar breakdown to that found in the Vanguard FTSE All-World ETF (VWRL) – an index-investor-favourite which covers the whole world – you might allocate 13% to the Emerging Markets.

That’s a 40% boost in allocation for the Emerging Market countries. One reason to be bullish about the Emerging Markets is the relative discount versus the Developed world, as we discussed earlier, but our main reason for overweighting is that we think these countries are better placed for growth over the long-term.

We’ll be keeping a close eye on the Emerging Markets over the years, and if they continue to grow relative to the Developed world we may have to increase our allocations in them.

Do you invest in the emerging markets, and what’s your allocation? And if you don’t invest in them, why not? Join the conversation in the comments below! 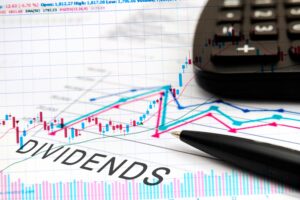 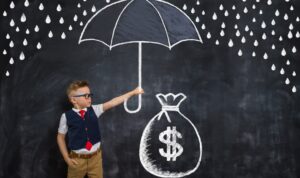